My local journalism restoration project: A journey that has taken me from California to Miami and back again

New Lookout Santa Cruz editor Dan Evans grew up in San Diego and has deep ties to the Bay Area and Santa Cruz itself. The onetime UC Santa Cruz student and eventual UC Berkeley grad returns to the Golden State from Miami where he was a journalism professor at Florida International University.

First came the flash. Then a crack of thunder, so loud and so close it seemed I could smell the ozone. Then the lights went out.

At that moment on that early July afternoon, I was sitting at a small table in an Airbnb in a hardscrabble neighborhood just north of downtown Jacksonville, Florida. I was talking to Lookout CEO Ken Doctor on a Zoom about the details that would take me from the Sunshine State to the golden one. I heard the boom, felt the house shake a touch, and jumped.

“You couldn’t hear that?” I replied, as the lights flickered and came back on.

He shook his head, I gave a silent “thank you” to the geniuses in Cupertino who designed my noise-canceling AirPods, and we continued our talk. Within 48 hours, I had agreed to leave my job as a journalism professor in Miami and become Lookout Santa Cruz’s executive editor.

That Jacksonville crackling happened as I was on a road trip with my dad, who had flown out from my hometown of San Diego. We try to take an annual trip together, and this time we were going to minor league baseball games throughout the Southeast. Our first stop was Jacksonville — home to the Giant Shrimp and its “Crustacean Nation” fan club. Other stops included the Charleston RiverDogs — partly owned by actor Bill Murray — the famed Durham Bulls and the oddly named Asheville Tourists.

After the details and start date were finalized, the reality of bringing my stuff, and my car, back to my native land began to set in. As he tends to do, my dad gave a commonsense solution.

“Well, your car needs to get to California, and I need to get home,” he said. “Want to just keep going west?”

And so it happened that my road to Santa Cruz began on the two-lane roads of North Carolina, moving to the roaring interstates through St. Louis, Denver, Salt Lake City and Reno, ending at the terminus of Highway 17.

But the metaphorical journey was much more straightforward: Local journalism has always been my true love and my return to Santa Cruz nearly 30 years after leaving feels like a spiritual homecoming.

I attended UC Santa Cruz in the early 1990s before finishing up my undergraduate degree at UC Berkeley. Every journalism job I’ve had since then has been in California; prior to my move to Florida five years ago, I was the editor of community news for the Los Angeles Times.

As I finish up the business of packing and the long goodbyes that are a non-negotiable feature of South Florida life, I want to talk about some of my plans for the newsroom, our coverage, and details on our CZU, One Year Later project.

First off, you might have noticed our jobs page has a lot of opportunities awaiting the right people. We’re looking to expand our staff, key to our mission of both explaining the goings-on in Santa Cruz County and making our region a better place to live.

The what and when does drive the news, but we know you want to know the why and the how. That kind of coverage has long been uneven in cities across the country, but it has increasingly disappeared as vulture capitalists look to squeeze every dime out of once-proud dailies.

As we staff up, you’ll see in-depth enterprise pieces focused on the issues gripping our county — in our current emphases on affordability with correspondent Grace Stetson and business recovery with correspondent Neil Strebig, and beyond. We’re digital-only and mobile-first, with a focus on interactive graphics, audio and video. Data increasingly rules our lives, so we will look to showcase relevant statistics and information in a visually compelling way.

Lookout gives you coverage of the one issue that affects every single person who lives in Santa Cruz County.

Additionally, I’m asking the staff to work toward producing pieces with a mindset tuned to Lookout’s fundamental mission: Offering solutions, not just pointing to problems. This ethos, championed by the Solutions Journalism Network, and other pioneers, is simple in concept. After bringing more light to problems and issues, focus as much as possible on successful solutions — wherever they are found. Can any of the lessons learned in these other places be applied here? How?

Research done by the group has shown this approach does the following:

Though not proven as yet, the hope is that such an approach also can be a nudge to local leaders to address these issues, especially if there is a potential solution elsewhere.

Finally, I hope you are taking in our CZU, One Year later series of pieces, reflections, photos, and graphics memorializing the CZU fire. Lookout had not launched when that fateful lightning bolt set off the worst wildfire in county history. In its aftermath, though, our recovery and preparation coverage excelled. Now, we acknowledge the heroism, the loss, and document the steps forward.

Lookout checks in on the recovery effort

In a multi-part series, we talk to the folks who were hit hardest by nature’s wrath last August.

All our special CZU coverage

The fire itself burned for 37 days, and our plan is to focus a significant amount of our coverage on CZU in the coming weeks. This is part of our commitment to the people of Santa Cruz County.

I hope to meet a number of you in person in the year ahead, as Lookout convenes numerous ways to meet our staff and for us to hear your thoughts. I look forward to meeting the people that make our region the beautiful, weird, and deeply special place that it is.

2020 Hindsight — co-produced by Shmuel Thaler and Lookout’s Wallace Baine and Kevin Painchaud — marks the astonishing year that was in Santa Cruz. If you click on the image below and sign up for an annual membership, you can get an authors' signed copy of the keepsake book. Offer applies to new memberships only. Use promo code: 2020Hindsight 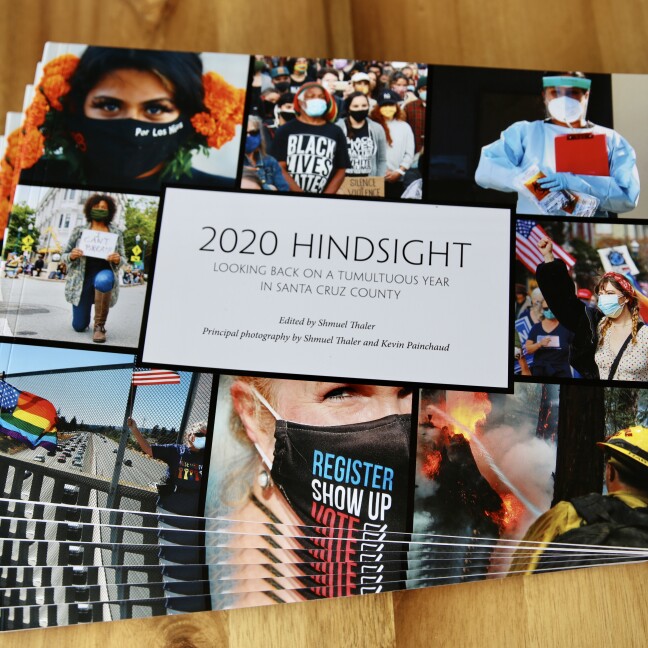 Dan Evans is the Executive Editor of Lookout Local, bringing with him more than two decades of local news and journalism education experience. Most recently, he was a journalism professor at Florida International University in Miami and, prior to that, oversaw local coverage for the Los Angeles Times. He deeply believes a local publication should both explain and improve its community, and has pledged to do just that in Santa Cruz.